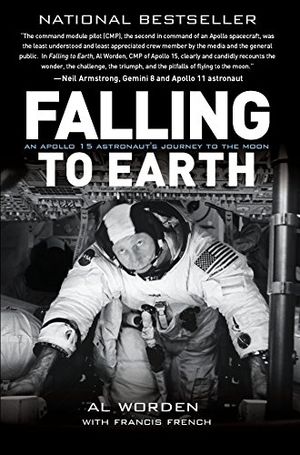 Falling to Earth: An Apollo 15 Astronaut's Journey to the Moon

As command module pilot for the Apollo 15 mission to the moon in 1971, Al Worden flew on what is widely regarded as the greatest exploration mission that humans have ever attempted. He spent six days orbiting the moon, including three days completely alone, the most isolated human in existence. During the return from the moon to earth he also conducted the first spacewalk in deep space, becoming the first human ever to see both the entire earth and moon simply by turning his head. The Apollo 15 flight capped an already-impressive career as an astronaut, including important work on the pioneering Apollo 9 and Apollo 12 missions, as well as the perilous flight of Apollo 13.

Nine months after his return from the moon, Worden received a phone call telling him he was fired and ordering him out of his office by the end of the week. He refused to leave. What happened in those nine months, from being honored with parades and meetings with world leaders to being unceremoniously fired, has been a source of much speculation for four decades. Worden has never before told the full story around the dramatic events that shook NASA and ended his spaceflight career. Readers will learn them here for the first time, along with the exhilarating account of what it is like to journey to the moon and back. It's an unprecedentedly candid account of what it was like to be an Apollo astronaut, with all its glory but also its pitfalls.

Al Worden and Francis French
AL WORDEN served as a support crew member for Apollo 9, backup command module pilot for Apollo 12, and command module pilot for Apollo 15's mission July 26 - August 7, 1971. After retirement from active duty in 1975, Worden spent years in private industry before becoming the Chair of the Astronaut Scholarship Foundation. He lives in Vero Beach, Florida. FRANCIS FRENCH is director of education for the San Diego Air & Space Museum and co-author of the award-winning books Into that Silent Sea and In the Shadow of the Moon.

The command module pilot (CMP), the second in command of an Apollo spacecraft, was the least understood and least appreciated crew member by the media and the general public. In Falling to Earth, Al Worden, CMP of Apollo 15, clearly and candidly recounts the wonder, the challenge, the triumph, and the pitfalls of flying to the moon.
—Neil Armstrong
Ever wonder what it would be like to spend several days orbiting the moon—alone? Al Worden’s expressive description of his Apollo 15 mission takes you there, and then on the 250,000-mile return, falling to Earth. This is not just another space mission book. In his intense, tell-it-as-he-sees-it style, Worden details what led to that wondrous experience and all that followed.
—John Glenn
The space program first rewarded, and then punished, Al Worden—and he is better for it, as this exceptional book reveals. It’s the full story, told with clarity, insight, and humor, altogether a wonderful read.
—Michael Collins
A rip-roaring adventure—a wry and fascinating chronicle of a time when we actually knew how to fly people to the moon.
—Tom Jones
Al Worden does a fine job telling his interesting life story, his important role as the command module pilot for the highly successful Apollo 15 flight—and his abrupt firing as a NASA astronaut. The ins and outs of this latter story and his personal fall to Earth make for especially fascinating reading.
—William Anders
The talented men who made the pioneering flights to the moon were test pilots and scientists, team players and egomaniacs, goodie two-shoes and skirt-chasers, all driven by a shared goal—to go higher, faster, further than anyone in history. Al Worden was one of the best of this elite group: the first rookie astronaut to be entrusted with the tricky job of flying an Apollo command module, and ultimately a member of Apollo 15, the most scientifically productive lunar mission. His story, written with noted space historian Francis French, is a worthy companion to Tom Wolfe’s The Right Stuff.
—Michael Cassutt
Very few of us flew to the moon, and the stories we brought back with us are special, treasured, and unique. Al is both a pilot and a poet, and his honest portrayal of our exhilarating adventures will move and excite a whole new generation.
—Buzz Aldrin
Worden is eloquent, witty, and brutally honest, still in awe of the company he kept and the history he belongs to. A solid addition to space-literature collections.
—Booklist