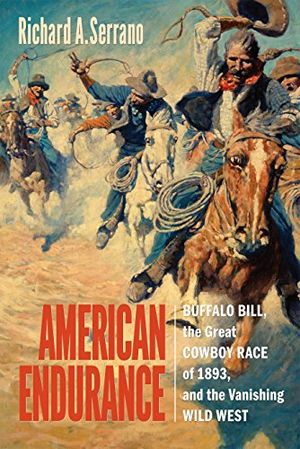 American Endurance: Buffalo Bill, the Great Cowboy Race of 1893, and the Vanishing Wild West
by Richard A. Serrano
$39.56

Pulitzer Prize-winning journalist and author Richard A. Serrano's new book American Endurance: The Great Cowboy Race and the Vanishing Wild West is history, mystery, and Western all rolled into one. In June 1893, nine cowboys raced across a thousand miles of American prairie to the Chicago World's Fair. For two weeks they thundered past angry sheriffs, governors, and Humane Society inspectors intent on halting their race. Waiting for them at the finish line was Buffalo Bill Cody, who had set up his Wild West Show right next to the World's Fair that had refused to allow his exhibition at the fair.

The Great Cowboy Race occurred at a pivotal moment in our nation's history: many believed the frontier was settled and the West was no more. The Chicago World's Fair represented the triumph of modernity and the end of the cowboy age. Except no one told the cowboys. Racing toward Buffalo Bill Cody and the gold-plated Colt revolver he promised to the first to reach his arena, nine men went on a Wild West stampede from tiny Chadron, Nebraska, to bustling Chicago. But at the first thud of hooves pounding on Chicago's brick pavement, the race devolved into chaos. Some of the cowboys shipped their horses part of the way by rail, or hired private buggies. One had the unfair advantage of having helped plan the route map in the first place. It took three days, numerous allegations, and a good old Western showdown to sort out who was first to Chicago, and who won the Great Cowboy Race.

Richard A. Serrano
RICHARD A. SERRANO is a former reporter for the Kansas City Times and was a longtime Washington correspondent for the Los Angeles Times. He has shared in three Pulitzer Prizes for coverage of the San Bernadino terror attacks, the Hyatt Sky Walks disaster in Kansas City, and the Rodney King riots in Los Angeles. He is the author of several books, including American Endurance and Last of the Blue and Gray.

At the end of the nineteenth century, as electricity became widely available and cable cars and trolleys replaced horses, Americans swarmed to the 1893 Chicago World’s Fair to see the wonders the future held. Amid the roar of the machines and gadgets on display arose a different sound: the clatter of hooves. Nine cowboys raced across the country toward a competing Chicago fair held by Buffalo Bill Cody, hell-bent on proving that Wild West ways still mattered in this strange new world. This is a plain good story, and it’s what history is all about.
—Winston Groom, author of El Paso: A Novel
This is a brilliantly researched and written ode to the end of the Old West and of the men who refused to give up the reins on a distinctly American era. Serrano is a consummate storyteller, keeping this one galloping on course across the plains and down the dusty trails of the West to the cobblestone streets of the new urban America. This is a book that entertains as much as it educates.
—Michael Connelly, New York Times–bestselling author of The Wrong Side of Goodbye (A Harry Bosch Novel)
A marvelous retelling of an all-but-forgotten incident in the closing of the American West. Serrano writes history as it should be written—driven by a powerful narrative and packed with vivid detail. Outstanding.
—John Jakes, author of the North and South trilogy
American Endurance, the thrilling story of the Great Cowboy Race of 1893, is deeply researched and written with wit and enthusiasm, both a celebration and an elegy for the Old West and the cowboy. Serrano packs an encyclopedia’s worth of history, folklore, legend, and reporting into this narrative of a publicity stunt that marked the closing of the frontier and the flourishing of show biz in America. It is a stirring account told with verve, authentic detail, and affection.
—Robert Morgan, author of Lions of the West
The Great Cowboy Race of 1893 is the basis for a gripping narrative of an event little known to the public or even Western historians. Building on profiles of the individual players in the story, Serrano expertly captures the essence of the Great Plains in the years immediately following the closing of the American frontier.
—Robert M. Utley, former chief historian, National Park Service, and author of twenty-one books on the history of the American West