In this groundbreaking anthology, twenty-two artists, architects, historians, critics, curators, and philosophers explore the role of public art in creating a national identity, contending that each work can only be understood by analyzing the context in which it is commissioned, built, and received. They emphasize the historical continuum between traditional works such as Mount Rushmore, the Washington Monument, and the New York Public Library lions, in addition to contemporary memorials such as the Vietnam Veterans Memorial and the Names Project AIDS Quilt. They discuss the influence of patronage on form and content, isolate the factors that precipitate controversy, and show how public art overtly and covertly conveys civic values and national culture.

Complete with an updated introduction, Critical Issues in Public Art shows how monuments, murals, memorials, and sculptures in public places are complex cultural achievements that must speak to increasingly diverse groups.

Harriet F. Senie and Sally Webster
HARRIET F. SENIE is director of the museum studies program and a professor of art history at The City College, New York, and the Graduate Center, City University of New York (CUNY). She is the author of Contemporary Public Sculpture: Traditions, Transformation, and Controversy (1992). SALLY WEBSTER is professor of art history at Lehman College, The Bronx, and at the Graduate Center, CUNY. She is the author of William Morris Hunt (1991).

The articles cover a broad range of topics from diverse perspectives. All speak to some aspect of the patronage, production, iconography, or meaning of public art, and some question the very nature and definition of public art itself. Thus these inquiries begin to define a new field . . . of American material culture studies.
—Winterthur Portfolio 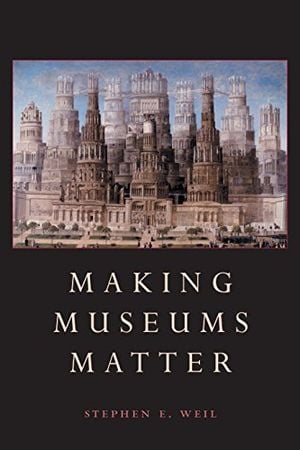 The Museum in Transition: A Philosophical Perspective
by Hilde S. Hein
$15.98