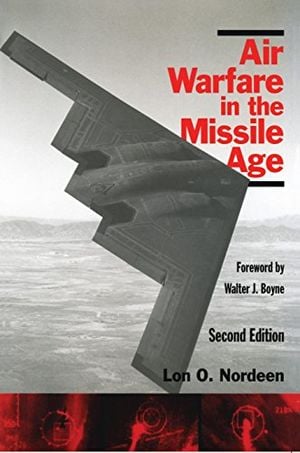 Air Warfare in the Missile Age

Lon O. Nordeen has completely updated his 1985 chronicle of military aviation’s evolving role in warfare, now covering the major conflicts of the past four decades. He presents the historical and political background of each conflict and includes in-depth discussions of the aircraft, weapons, tactics, training, new systems, and other factors that influenced the outcome of each war. New and existing chapters have been enhanced with information based on recently declassified material—especially regarding Vietnam—and new sources in Egypt, Israel, and the former Soviet Union. As “smart” bombs have become more successful in reducing the risks for pilots and frontline troops, air-missile warfare has become the central player in military conflicts. Air Warfare in the Missile Age, Second Edition, is a valuable resource for understanding the evolution of modern air warfare.

Lon O. Nordeen
Lon O. Nordeen is manager, business development at Boeing. He is the author of Fighters over Israel (1990) and Phoenix over the Nile: A History of Egyptian Air Power, 1933-1994 (Smithsonian, 1996). He lives in St. Louis, Missouri.

The finest book out on the air wars of the past 20 years.
—Warbirds
Should be considered important reading, establishing perhaps the base level of education required for public sector discussion of its important subject.
—Combat Weapons